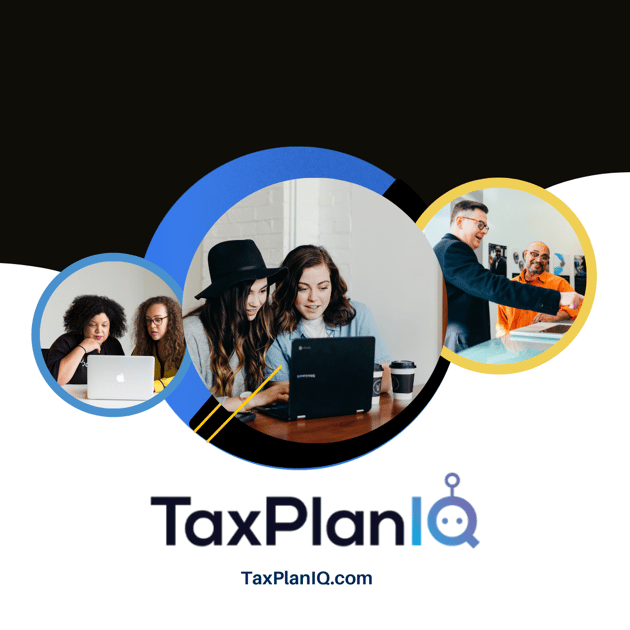 Each client and tax situation is different, and sometimes you will come across clients that have particularly complex tax issues. TaxPlanIQ is the perfect tool for helping accountants navigate those sorts of issues.

TaxPlanIQ helps you make better decisions for your clients that save them time, money, and stress. It allows you to build a comprehensive tax plan in an easy-to-understand format and charge based on value.

TaxPlanIQ’s reports show the total tax savings and the return on investment your clients will see when they work with your firm.

Below are two case studies that demonstrate how you can use TaxPlanIQ to handle intricate client issues and show them the value of working with you.

David met with Sharla to discuss a tax plan for a prospective client. He wants to help them save as much money on their taxes as possible given their unique situation.

David’s potential client is a married couple, filing jointly. They started a tech company in 2020 and are co-owners, with one of them owning 60% of the business and the other owning 40%. In 2021, the business’ gross income was $52k. However, Owner 1 was paid a salary of $25k while Owner 2 did not receive a salary, taking the BGI down to $27k. Owner 1 being paid a salary is improper practice for a partnership. They are considering filing a late S-Corp election. The business won several government contracts in 2021, so their BGI is expected to be higher in 2022 on, due to said long-term government contracts.

Sharla began by looking at the Choice of Entity section, which contains both the self-employment tax and Medicare deductions. NY has a double taxation system that would mean that the client would be taxed 10% individually and 8.85% as an S-Corp.

Despite a projected $7300 in federal savings, converting the business over to an S-Corp would cause a $12,125 increase in state taxes.

“In New York City, an S-Corp may not be the most optimal way to go anymore.”

Taking a look at the ROI, Sharla was stuck on the Choice of Entity election and encouraged David to find a workaround. The S-Corp election would cost the prospect $6545 in both Year One and Year Two.

“It just seems counterintuitive that New York would permit this, where it’s going to cost them money to have an S-Corp.”

David agreed, saying “That’s why in New York a lot of people don’t convert to S-Corps, because it may not make sense. The only reason they have to is because they’re paying salaries to the owner, and that’s improper for a partnership.”

Sharla queried about converting them to a C-Corp. David hadn’t considered that yet.

The owners hadn’t done any distributions, only reinvestments into the business, so that opened up the possibility of converting them to a C-Corp. The only issue with that is the limitations on funds. Sharla asked if the amount they would be earning would be sufficient for them to live comfortably in New York.

David said yes but that they wouldn’t be able to reinvest into the business, into employees and technology.

David also clarified that converting over to a C-Corp wouldn’t get them around the NY State tax, as the state tax is on corporations in general.

As they started wrapping up, Sharla noted that David could save his prospective client $27,727 in Year One and Year Two. The client would see a 309% return on investment and would be looking at a total savings of approximately $266k over the next 10 years, provided that David found a more affordable Defined Benefits Plan administrator and made a slight price adjustment to his implementation fee.

However, just as they were about to end, David had a realization that due to the client’s contributions to a Defined Benefits Plan and an Accountable Plan, the prospect's actual net income would be much lower in 2021, therefore altering all of the Choice of Entity calculations.

Some of the strategies Sharla discussed with David include:

Going back to the ROI statement, David could save his prospective client $37k in Year One and Year Two. The client would see a 446% return on investment and would be looking at a total savings of approximately $356k over the next 10 years, provided that he includes the same stipulations as before.

Gary met with Sharla to discuss a tax plan for a new client. This client has had a business advisor in the past and Gary was looking for some direction as to how to help him get the tax deductions he’s looking for.

Gary’s new client is a 41-year-old, single doctor from Nevada. He doesn’t have any kids but supports his parents in LA. He works for a hospital in Nevada and does contract work for a hospital in California. His salary is approximately $641k.

He has 6 long-term rentals across different states, and a Wyoming holding company holds his Florida rentals in an LLC. He had some non-payer tenants in Florida in 2021. A business advisor suggested setting up a WY trust with the holding company due to some “unique rules”— potentially a WING/NING situation (Wyoming Incomplete-gift Non-grantor Gift/Nevada Incomplete-gift Non-grantor Gift).

His Texas and North Carolina rentals are not in the LLC; he’s the sole proprietor. Generally, the rentals are netting positive cash flow, but he’s not getting the tax deductions that he was expecting.

Sharla offered a few recommendations to Gary to help guide his conversation with his new client.

Sharla’s first recommendation to Gary was to determine what those unique rules and situations are. She said some business advisors extoll the benefits of setting up in this state or another and oftentimes those situations can be illegitimate or sketchy.

The other suggestion she had for Gary is looking into placing all of the client’s properties into one LLC. She recommended placing them in a Series LLC.

After looking at his 2019 tax returns, Sharla had a few comments and a recommendation. She noted that the client doesn’t have a Schedule 1 despite having multiple rental properties and encouraged Gary to look into that.

She also said that the client received $38k in rental payments and approximately $15k in interest, and he had $43k in expenses. After reviewing the client’s Schedule E, she noted that the client won’t ever be able to be qualified as a real estate professional due to his having two jobs. However, Sharla recommended seeing if he could be characterized as an active investor which would entitle him to a $25,000 deduction at the very least.

Being that the contract work with the California hospital is new, she recommended putting the contract work in an S-Corp, doing a benefits review for the Nevada hospital, and then placing that contracted income into a solo 401k or an IRA. Putting it into an S-Corp would minimize the self-employment taxes.

While Sharla didn’t have enough information to do a full tax plan, she did give Gary some guiding questions that will help determine the best course of action for that client going forward.

If you are interested in using TaxPlanIQ to better explain your value to your clients, sign up for a free trial today!